Dear Kids and all Writers,

Need inspiration for writing? Check out this true story . . .

As I was decorating my home for the holidays recently, my mind transported me back to the late 1990s. My daughter was in high school then. Despite it being a weekend that December day and so close to the holidays, she had a writing assignment that was giving her fits. She burst out of her bedroom and flopped down on the living room sofa.

“Lucky you,” she said to me angrily. “You get to decorate the Christmas tree while I have to write this dumb paper for my English class.”

“Would you believe that I have to write about an object or a feeling as if I were William Shakespeare? You know, in his language called “Early Modern English.” Doesn’t sound too modern to me with all the thee’s and thou’s he tossed around in his plays.”

Before I could say anything, she continued. “And what’s worse, I can’t come up with a topic. And what’s even worse, I’d rather be decorating the tree with you!”

“About how upset you feel because you’d rather be decorating the Christmas tree with pretty lights and ornaments. You would be describing both an object and a feeling!”

Without another word, my daughter disappeared into her bedroom. Within thirty minutes, she was back, mission accomplished and ready to help decorate!

I laughed as she read her essay to me: “Hark, methinks I spy yon Yuletide tree! Drat! Such pleasures as I donning it with festive fobs is not written in fiery stars . . .” and so on, until I thought the Bard of Avon was sitting in the living room, describing the bright scene!

But best of all, she actually had fun writing the piece once she had an idea. Her laughter as she read was heartwarming for us both.

So get a clue, writers. Sometimes, your next idea might be right in front of you. Listen to your feelings. Look nearby for opportunities. “Gadzooks! Methinks I spy a writer taking up thy quill . . . ”

END_OF_DOCUMENT_TOKEN_TO_BE_REPLACED

Dear Readers of All Ages,

You’ve probably heard the term or maybe even the song, “Pennies from Heaven.” The pennies represent unexpected good fortune or a windfall. Yesterday, I received dollars from Heaven. Emphasis on “Heaven.”

I was at the check-out counter in a grocery store where I seldom shop. I had never signed up for the “Club Card” that would have entitled me to those wonderful discounted prices on many items. The checker suggested that I put in a relative’s phone number to see if it would work. Wow! Nice of her to tell me that. I then remembered that my late mother used to shop at the store often. So, I entered her old phone number and, . . .

You guessed it. It worked!

Thanks, Mom in Heaven, for saving me $4.21 yesterday. But more than money, you also sent me a warm, fuzzy feeling on a chilly day. You’ve been gone for almost four years, but I still miss you. So does Jimmy Lambchop, “our” dog.

So readers, get a clue. You might not know when you are about to receive heavenly pennies or dollars. So ears, eyes, and hearts wide open. And don’t forget to thank the person who sent them.

END_OF_DOCUMENT_TOKEN_TO_BE_REPLACED

A Note of Thanks

The season when many of us focus more intently on our blessings has arrived.

Years ago, when I was still a classroom teacher and raising a child, I taught my students and my daughter the value of saying thank you, especially for gifts they receive at this time of year and for their birthdays. I tried to impress upon them that whereas texting or emailing Grandma, Auntie, or Mom and Dad a thank-you was better than nothing, the best way, in my opinion, was with a handwritten note that gets mailed or hand delivered. (This was not intended to ensure a continuous flow of gifts year after year–though it might help!)

My daughter became very good at writing thank-yous without being told. Of course, it might have helped that I often gave her a box of thank-you notes as a stocking stuffer.

Many relatives who received these notes from her commented on how special it was for them to receive, the old-fashioned way in her own writing, her gratitude and other feelings when she opened the gift. Some students shared similar reactions from their family members with me. Some relatives said that was the only thanks they had received! This underscored my comments that thank-you notes can be very memorable as well as appreciated.

So get a clue, readers of all ages. Taking a few moments to hand write a thank-you note could double your gratitude in the hearts of some friends and relatives. And that can warm our hearts and make us all more thankful. Happy Thanksgiving to you and your family!

END_OF_DOCUMENT_TOKEN_TO_BE_REPLACED

I have spent some time this week listening to voices. No, not the ones in my head! Rather, these are voice snippets from ACX, a company that produces audiobooks.

Having listened to over 150 samples, I have narrowed my search down to about seven for a possible narrator/producer for the audiobook version of Nutmeg Street: Egyptian Secrets.

An audiobook can be a wonderful support for struggling readers as well as fun for anyone who wants to listen to the book in the car or wherever. It will probably be about five hours in length.

So get a clue, Readers. Listen up! Get ready to listen to the audiobook version of the exploits of our four favorite detectives. I hope to have it available by late spring of 2020.

END_OF_DOCUMENT_TOKEN_TO_BE_REPLACED

November 14, 2019
Dear Readers and Other Heartthrobs,
As I write this, it’s November 11th, the 25th Anniversary of my successful open-heart surgery! It was a six-hour, critical operation that repaired a too-long-undiagnosed congenital birth abnormality called “atrial septal defect.” You might know this as “a hole in the heart.” Basically, all those years, my heart had no wall (septum) between the atria (the two upper chambers of the heart), so I wasn’t getting enough oxygen. This left my skin tone blue-gray, not rosy, and I always needed a nap after the least exertion. The defect suddenly presented itself in 1994 and almost took me out–as the mother of a then thirteen-year-old.
Following the surgery, I spent a year getting fully back on track. Once home from the hospital, it took me a week before I could walk across the room without help. I practiced going a little farther every day before collapsing into a chair until by the end of two months, I was walking over a mile without chest pains, shortness of breath, or total body sweats. Eight months later, I finally learned how to swim in the same pool where I attempted lessons as a child. Yay! I never could learn as a kid because I got too tired and would be ordered out of the pool since I was “wasting” the instructor’s and other students’ time! Wow. True, but still  . . .  wow.
My news isn’t exactly reading-and-writing related this time. . . . But wait! On the other hand, without that surgery, I wouldn’t be here now, and there would be no Botanic Hill Detectives Mysteries. Plus I have a granddaughter I never would have had the pleasure of knowing and watching grow up strong and healthy. Life is beautiful, indeed.
So get a clue, Readers. Here’s to the doctors that keep us healthy and kicking! And here’s to taking good care of our hearts. Be thankful for each full breath you can take. And may the beat go on.
END_OF_DOCUMENT_TOKEN_TO_BE_REPLACED

My Book is Buzzing! 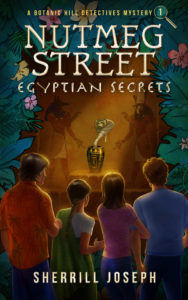 This has been an eventful week for Nutmeg Street: Egyptian Secrets and for me.

On Friday, November 1, the Cover Reveal for my book took place. In case you missed it, please check out the image to the right. I hope you like it. I am very pleased with the end result, especially since it took three months of compromising among the publishers, designers, and me. I was reminded at how important–and often, frustrating–teamwork can be.

On Monday, November 4, the Book Blitz got underway. This is where my book cover and information were plastered all over social media via the tour director (thank you, Shannon, at Reads and Reels Book Tours), book bloggers, and me to acquaint people with my book and when it will finally be available for purchase (on Amazon on February 1, 2020–please mark your calendars NOW!). Accompanying the blitz was a Rafflecopter giveaway for two winners, one inside and one outside the U.S., for a free, autographed book, some book swag, and an Amazon gift card.

There is still a daunting amount of work (i.e., labor of love) for me to do behind the scenes between now and February 1 to make this book dream a reality.

So get a clue, Readers. Watch this space for more adventures in the publication of Nutmeg Street: Egyptian Secrets. These activities continue to be challenging and humbling for me, which will make the finished product all the more endearing for this author and, hopefully, a fabulous read for you.