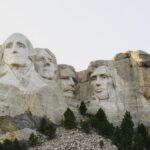 While listening to President Biden’s Inaugural Address on January 20, I was inspired to see what other presidents had said on their Inauguration days.

I purchased Collected Presidential Inaugural Addresses 1789-2017, by Eupator Classics Law and Liberty Library, 2020. It covers Presidents Washington through Trump. (I have added a copy of Biden’s speech to the back of the book to make it current.)

In my opinion, this is a book to be savored, not read straight through too quickly. I have decided to read the speeches in order, but at a pace to allow me to appreciate the words and to visualize the historical times when these leaders lived.

Previewing the book has shown me that President George Washington’s Second Inaugural Address, delivered on March 4, 1793, is the shortest to date. I timed myself reading it aloud; it clocked in at one minute. Also, Washington delivered it just before he was to be sworn in, not after, as is now done. Washington warned that if he didn’t uphold his oath, he should incur “constitutional punishment” and “be subject to the upbraidings of all who are now witnesses of the present solemn ceremony.”

President William Henry Harrison’s Inaugural Address, delivered on March 4, 1841, is the longest to date. (It covers thirteen pages in the book and must have lasted well over one hour!) The average timespan for most other speeches since appears to be 20-30 minutes.

President Franklin D. Roosevelt Second Inaugural Address on January 20, 1937, was the first to be given in January, not in March. The Inauguration date had been permanently changed to January 20 (or the 21st if the 20th is a Sunday) with the passage of the “Twentieth Amendment” in 1933.

Also, many presidents made references to other presidents’ remarks, usually in a positive way! And God’s name was invoked often for guidance in the task ahead.

So, get a clue, Readers. Reading inaugural addresses or other politicians’ speeches can be a rich, fun way to learn history, or to launch more study of the period in which our presidents lived.