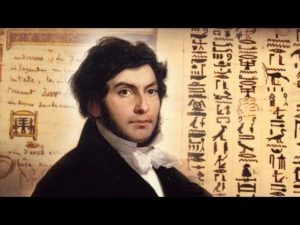 Recently, I was looking for appropriate images for my book cover for Nutmeg Street: Egyptian Secrets. Hieroglyphics came to mind, the picture script of the ancient Egyptians that decorated the temples, tombs, and sarcophagi of their kings and queens. That’s when I discovered Jean-Francois Champollion!

Champollion was born in France and lived from 1790 to 1832. By age sixteen, he had learned six ancient languages, in addition to Latin and Greek. Whoa! Using those skills, Champollion noticed Greek words on the famous Rosetta Stone (Look this up!) next to some hieroglyphics. He figured if he used the Greek, he could translate each hieroglyph. Viola! He was correct! His discovery helped scientists unlock the secrets of ancient Egyptian culture, history, customs, and burial practices. Champollion earned fame, book deals, and the title, “Father of Egyptology.”

So get a clue from Monsieur Champollion and his hieroglyphics: Use your talents and keep your ears and eyes open. You never know what secrets you might unlock–or where–that could benefit the world!