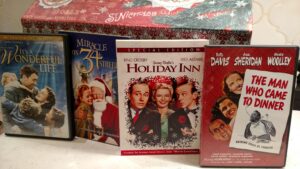 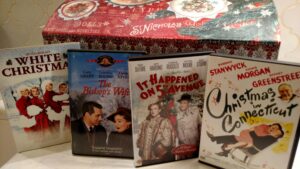 On the first of each month, I find a treat in my email inbox. It’s the monthly “Now Playing” program guide from Turner Classic Movies (TCM).

I have been a movie buff of Hollywood’s Golden Age films (uh, kids, that’s from the 1930s and ’40s) since I was a kid myself. I fell in love at the age of ten with those black and white works of art while watching “The Early Show,” a weekday cavalcade of the old movies shared by a local television personality in San Diego, California. I would race home from school every day to tune in. Instead of commercials, the program host would share the actors’ bios, some history of the time, and anecdotes of incidents that happened on the set when the movies were being made. He was a true movie aficionado. (Kids, that means someone who’s a big fan and very smart about a particular subject.) Such was my earliest schooling in those film that would remain important to me as I grew up.

Happily, there is a fabulous line-up for my December holiday viewing on TCM! Just in time to spread some joy. Here are a few I will be watching:

One of my all-time favorites is The Bishop’s Wife (1947). The story is about Dudley the angel (Cary Grant) who comes to Earth to help a stressed bishop (David Niven), whose priorities need realignment; and, the bishop’s wife (Loretta Young), who’s unhappy because their life together has taken a wrong turn since her husband rose in power in the church.

Next is Christmas in Connecticut (1945). A New York City cooking columnist (Barbara Stanwyck) pretends to be something she isn’t on a farm in Connecticut to keep her publisher boss (Sydney Greenstreet) from finding out her secret. Rounding out this rom-com’s cast are Dennis Morgan, S. Z. Sakall, and Una O’Connor.

And I can’t omit It Happened on Fifth Avenue (1947), which features a homeless man (Victor Moore) and his dog Sam, who take up residence every year in an industrialist’s vacated mansion on New York’s Fifth Avenue. The poor man suddenly finds that he has company from persons who want to share “his” digs for a variety of interesting reasons. He teaches them all valuable lessons about forgiveness, true wealth, and gratitude. Others in the cast include Charles Ruggles, Don DeFore, and Gale Storm.

So, get a clue, Readers. Movies are a part of who many of us are. So true for me, personally and as an author! Please don’t overlook the classics from Tinseltown for the holidays–or for any day. Kids, I hope you’ll come to appreciate these works of art that are the forerunners of many special features, effects, and storylines you enjoy in movies made nowadays. Happy viewing!