Not “Happily Ever After”

Not “Happily Ever After” 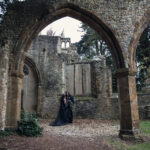 February is the month when we celebrate Valentine’s Day and true love.

We, of course, know that in real life as well as in literature, some of the most intriguing romances have a dark side, maybe even a tragic ending. This type of literature is called Dark Romanticism.

Prominent authors of Dark Romanticism include Edgar Allan Poe (“The Fall of the House of Usher”), Mary Shelley (Frankenstein), J. Sheridan Le Fanu (Carmilla), Bram Stoker (Dracula), and many others. Not to be excluded in my opinion is Emily Bronte, one of the three famous Bronte sisters, and author of the tragic romance Wuthering Heights. She published the book–her only novel–under her pseudonym, Ellis Bell, in England in 1847. Perhaps because of Valentine’s Day, I’ve been thinking about two of her characters from that book–Catherine and Heathcliff.

Wuthering Heights led a 2007 British poll as “the greatest love story of all time.” But some of the novel’s admirers also considered it “not a love story at all but an exploration in evil and abuse.” Dark Romanticism. Psychologists, feel free to weigh in here.

A little backstory for those not familiar with Wuthering Heights: Catherine Earnshaw and Heathcliff meet as children when Mr. Earnshaw finds the ragamuffin Heathcliff in an English train station and brings him home out of pity to live at Wuthering Heights, the family’s farmhouse on the bleak, windswept West Yorkshire moors. The two kids are close in age and drawn to each other. They soon enjoy day-long rambles on the moors and climbing hand in hand to the top of their “castle” Peniston Crag, a massive outcropping on the landscape near the Earnshaw farm. Catherine considers the greatest punishment anyone can give her is to separate her from Heathcliff.

But . . . when they become teenagers, the English caste system starts tearing them apart. Catherine abandons Heathcliff for fortune and social standing by marrying Edgar Linton, a member of the landed gentry.  A heartbroken Heathcliff runs away during a rainstorm (adds drama), and everyone, including a grief-stricken Catherine, thinks he’s never coming back. But he does come back, years later, a rich and polished man, now bent on revenge for his miseries in love. He proceeds to carry out his intricate plan–but I’ll let you read the story to see what ensues. I wouldn’t want to be guilty of spoilers!

Despite Catherine and Heathcliff’s flawed, dysfunctional relationship (as some describe it) that ended tragically, it still draws me in–probably because it is so tragic as are many works of Dark Romanticism. And we know that good literature must have a problem, or we lose interest. These two characters, who have what John Whitley of the University of Sussex calls “a wild, passionate, intense almost demonic love,” are arguably, I believe, the nineteenth century’s Gothic era answer to Shakespeare’s Elizabethan era Romeo and Juliet.

Why else do I find Wuthering Heights so compelling and consider it my favorite story of all time? Perhaps Virginia Woolf said it best in a review: “It is as if Emily Bronte could tear up all that we know human beings by, and fill these unrecognizable transparencies with such a gust of life that they transcend reality.” And I know that I read to escape reality while simultaneously looking for ways to deal with it. Plus, there’s the whole intrigue surrounding Emily Bronte’s ability to envision and write such a passionate story while leading a solidary, dreary life on the bleak Yorkshire moors. She never married and had no romantic attachments, then died soon after her thirtieth birthday. But all of that is of itself fodder for another blog–and maybe another dark Gothic romance!

So, get a clue, Readers. Check out Wuthering Heights, even if you’ve already read it. It’s a tale that might give the lie to Tennyson’s famous quote, “Tis better to have loved and lost than never to have loved at all.” And if you’d like to read more about the story and Catherine and Heathcliff’s tempestuous relationship, you can find some  fascinating information here: https://study.com/academy/lesson/catherine-heathcliffs-relationship-in-wuthering-heights-analysis-quotes.html