A Blast from the Past

A Blast from the Past 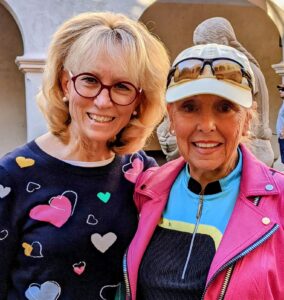 Yesterday was another red-letter day for me. I had an Anniversary Lunch with my second, second-grade teacher, Connie Colonelli deWerd. We were celebrating SIXTY YEARS of friendship!

We first met when then “Miss Colonelli” arrived in my classroom in February of 1961 to take over for my second-grade teacher, Mrs. Clardy. Her military husband was being relocated to the Midwest. Christmas of 1960 was a sad one for me, knowing Mrs. Clardy was leaving. I dreaded who would be taking her place.

But in February, in walked the fabulous Miss Colonelli. Being young, pretty, and fresh out of college, she brought energy and new ideas to our class. And she drove a cool sports car!

Miss Colonelli got my classmates and me excited about new subjects. One was geology. My parents were impressed that I knew the meanings of and could spell terms like igneous, sedimentary, and metamorphic! My heart soared with pride!

Also, Miss Colonelli taught us botany by growing bright green vine-like plants from sweet potatoes poised on toothpicks, sticking out of glass jars on the sun-drenched science table in front of a bank of French doors that looked east onto the playground.

She was our own personal Egyptologist, sharing her travel slides from the pyramids and ancient tombs on Friday afternoons.

And then, there were her art lessons! We all became little Monets and Gauguins with our watercolors and poster paint.

It was difficult to say good-bye in June when school ended, so I resolved not to. I continued to visit her after school throughout the elementary years and when I left the school and moved on to higher grades and college. She invited me to her wedding some years later. And she was deservedly one of the dedicatees in my Book 1, Nutmeg Street: Egyptian Secrets.

Because of Connie Colonelli deWerd, I became a sports car-driving teacher who took pride in presenting myself professionally and delivering interesting, quality lessons to my own students.

I hope you still have someone in your life who has been inspirational. If you do, you’re lucky like me. Just thank them often and never let them go.