Standing in solidarity with the people of Ukraine, I’d like to introduce–or reintroduce–you to a female Ukrainian poet named Lyuba Yakimchuk.

She was born in 1985 in Pervomaisk, Luhansk, in what was Ukraine’s industrial east. She and her family lost their home and fled as refugees in 2014 when Russian-backed militants occupied her city. Before that invasion, people of her town used to pick the wild apricots from the trees on their country’s border with Russia and give them to conductors to sell on trains that ran between Moscow and Kyiv.

She and her husband are currently living in Kyiv. As of yesterday, they were still there in order “to donate blood for Ukrainian soldiers and to try to be helpful.”

Yakimchuk is a multi award-winning poet, vocalist, and important artistic presence in Ukraine. Kyiv’s New Time magazine listed her among the 100 most influential people in the arts in Ukraine.

In 2021, she published a collection of poems entitled Apricots of Donbas about people surviving war. The first line of her eponymous poem is, “Where no more apricots grow, Russia starts.” The collection has been translated into over twenty languages including English.

Her poetry is described as “playfulness in the face of catastrophe” and evokes Ukraine’s fight for independence and legacy of war. Yakimchuk said, “Language is as beautiful as this world. So, when someone destroys your world, language reflects that.”

So, get a clue, Readers. Perhaps you will feel compelled to investigate this courageous Ukrainian poet’s works. You can find Apricots of Donbas HERE.

A Collection of Yakimchuk’s Poetry 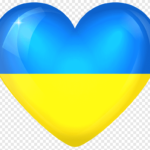