Hi, Kids and All Readers,

I’m back with more excerpts as we anticipate the November 9 release of Walnut Street: Phantom Rider.

If you’re seeing this today, September 9, on my news page, it’s also Cover Reveal Day! I’ve added it below. I think the Phantom looks scary! I hope you do, too.

From Chapter 7, “Horse Sense and the Law”

The six detectives continue questioning Cody residents and are now at the sheriff’s office talking to Sheriff Buckley and Deputy Buchanan.

“It’s too bad more kids aren’t taking advantage of the great opportunity your parents are providing at the ranch,” the sheriff said with a head shake.

Ben shrugged and replied as politely as he could, “Maybe if we find out who’s been stealing things from the ranch, it’ll get more families back on board.”

The sheriff frowned. “Any more thefts out there since my last visit?”

“Yes,” Ben replied, then sighed. “Jax, our hired hand, told my dad this morning that more bridles and some spurs were taken last night. Dad’s going to call you about it later today to report it. Oh, and here’s another note the thief left. It was tacked to the barn door.” Ben handed the note to the sheriff, who observed that it was made from letters cut out and glued to a piece of dirty, crumpled paper like the last one. It read, “Get out now, or next, you will be injured!” 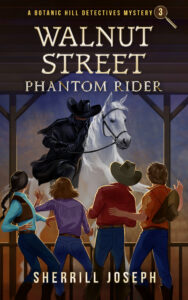 The four Botanic Hill Detectives are back at the ranch and decide to question the two hired hands about the white Arabian stallion Lightning.

The kids were on their feet, heading for the stables, with Rani already out in front as usual. They found the two hired hands busy finishing the grooming and stabling of Bella, Zippy, and Mrs. Mayfield’s horse for the night. . . .

The kids stood there for a minute watching the men, hoping the two might remember something about the Arabian horse. But nothing more was said, so they turned to leave. . . . But as the four started to head toward the bunkhouse to clean up, they heard a scream followed by a moan. It came from the back of the ranch house.