Excerpts continue as we anticipate the release of Walnut Street: Phantom Rider!

The six detectives arrived back at the ranch after a productive investigation of Rainbow Flats. Gracie decided to attend to her sticker collection book and headed for the barn’s hayloft, her favorite spot for working on her hobby. 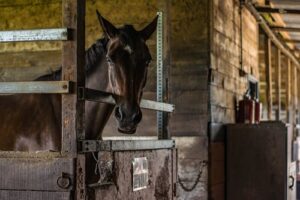 . . . The group’s visit to Rainbow Flats had reminded her that she had purchased many sheets of rainbow stickers at Cody’s general store a month ago that needed pasting in.

A few minutes later, Gracie entered the barn. It was growing dark and wonderfully quiet except for an occasional rustling sound as a horse moved in its stall. The humid smell of the barn on rainy days gave her a sense of peace. She climbed the old wooden ladder to the hayloft and hunkered down in a thick pile of crunchy straw near the big window to make use of the dwindling light. Lying on her stomach, she lost track of time as she worked away placing various stickers on theme pages. She enjoyed hearing Cookie and the other horses as they softly ate and snorted. She could just spy them through the slats in the loft’s floor.

Soon, however, Gracie discovered that she and the horses were not alone. A man’s familiar voice drifted upwards, interrupting her reverie. He was on the barn’s wall phone below, and his tone sounded frantic.

When Gracie failed to show up for dinner, the family got worried and checked the barn. Clues led them to Rainbow Flats to search for the girl. 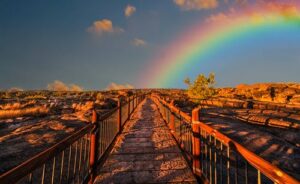 In no time, Gracie’s parents, Jax, and the five kids were in the van heading for the ghost town. Mr. Mayfield applied as much speed as he safely could on the slick, muddy road that led northeast from the ranch. Moki never dreamed he would be back in that desolate place again, let alone tonight.

No one spoke as the car sped along. A few rays of sunlight glimmered through the leftover pink and gray rainclouds, but the brightness wouldn’t last much longer.

When the van finally pulled into the ghost town, the pitch black night had descended. Mr. Mayfield turned off his headlights so as not to announce their arrival. Then, he drove quietly right down the middle of Main Street.

“Look for some lights in a building,” his wife said as she scanned both sides of the street. Soon, Lexi called out, “I see some flickering lights in the old church up ahead.”