As of today, April 14, my Book 4, Saffron Street: Island Danger, is off to the editor!

That means many things, but for this moment, it allows me to start thinking about Book 5.

My next Botanic Hill Detectives mystery will have a problem wrapped around a long-deceased woman and the American poet, Edgar Allan Poe (1809 – 1849).

Research on one of my favorite American writers has begun. This is what I seek: Was Poe really insane as some critics, biographers, and readers down the centuries have proposed or propagated? Did he want or even earn the label, “The Master of the Macabre”?

I had an English professor years ago who contended that Poe was not mad, insane, obsessed with cemeteries, or even an odd bird. Rather, Poe was a hardworking, starving writer who had a difficult life. He was orphaned at the age of two and was eventually and inexplicably disinherited by his foster father John Allan. Poe quickly became disillusioned with his own life, turning to alcohol after the death of his young wife.

This particular professor was unhappy that two centuries later, many still promote the “insanity lie” about Poe. It was, in part, created by the writer’s adversary and uncomplimentary biographer, Rufus Griswold, who shortly after Poe’s death, made him out to be a womanizing, drug-fueled, immoral madman. Poe’s friends vehemently denied Griswold’s ruinous image. They claimed Poe was a misunderstood genius, not recognized in his own time.

Worse, perhaps, is how too many still consider Poe to have been a writer of horror without asking why his frequent themes, or motifs, were death and loss.

So, why did Poe write stories and poems that haunt us? Was it because he was disillusioned with life, or was it perhaps from his acceptance of death’s inevitability with the horror being death’s unpredictable timing? Was it both?

My former professor thought so, too, saying that through the writer’s stories, “Poe sought the outre–the bizarre, the unusual, the otherworldly–in an attempt to rise above life, to find death in life.” To escape his woes even briefly, especially the loss of his wife. His burdens could have also explained why his writing was rife with dying young women.

So, get a clue, Readers. I believe it’s important to ask then seek the truth about why authors write as they do and what inspires their frequent themes, so we don’t label them too quickly or worse–incorrectly. In real life, Poe was no gravedigger or an author to drag out just for Halloween. To think of him merely in those terms is to miss much about the man and his works. 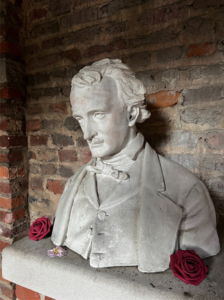 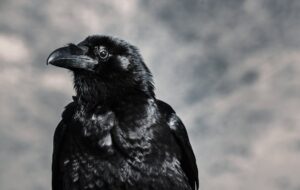