Today, June 23, 2022, is the twenty-fifth anniversary of my father’s passing. I am especially missing him today.

My dad, Donald Johns, was born and raised in North Dakota in a little farming town called Wing, near Bismarck. The northern winters aggravated his asthma so badly, he missed much school. So, in 1930, he, his three siblings, and parents moved to sunny San Diego, California, where he finally finished high school a few years later at the age of twenty-one. An interesting aside: my dad and actor Gregory Peck were in the same graduating class at San Diego High School!

My dad and my mom, Margaret, met during World War II when they both worked at an aircraft factory here in San Diego. My mom was a “Rosie the Riveter,” and my dad was her boss. Stolen looks soon turned to love, and they were married a few years later on May 30, 1947, in their home’s living room. (See photo below.)

Together, they raised three daughters: my oldest sister, my twin sister, and me. My dad’s parents–my grandparents–also lived with us in the same house purchased by them and my dad in 1945. We were cozy in our three bedroom, one bathroom home, but we all made it work, even boarding as well as entertaining countless visiting relatives around the dining room table over the years. That house remained in the family until 2016 when it broke my heart to have to sell it after my mom passed that year.

My dad was very ill the last four years of his life, but he held on so that he and my mom could celebrate their Golden Wedding Anniversary in 1997. He died three weeks later. Their seventy-fifth wedding anniversary was last month.

I miss you, Daddy, especially today. I miss you, too, Mom. Daddy, I will always remember your soft-spoken, shy nature, beautiful classical piano playing wafting from the living room, love for our pet cat despite claiming to be allergic to her, our Sunday afternoon drives, your hard work (along with Mom’s) that kept us fed and clothed, your examples of kindness and understated humor, and the importance of socking away part of each paycheck for vacations and retirement.

So, get a clue, Readers. Love those close to you every day. Life’s too short to do otherwise. 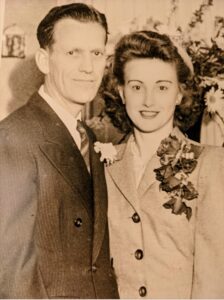