Do you love graham crackers?

I do! I have a fond childhood memory of the tasty snack beyond S’mores. Every Easter, my mom would make a yellow cake and slather on thick layers of homemade chocolate frosting. Any leftover frosting was sandwiched between two graham cracker halves for my sisters’ and my snacks. When my daughter was small, I started that tradition with her. I can’t think of Easter now without craving graham crackers and chocolate frosting. (Try it; you’ll like it!) But this combo of crackers and frosting is ironic because it’s so antithetical to the origin of the treat as you are about to learn.

Did you know that graham crackers have a rather bizarre, sugar-free history?

A much blander version of modern-day graham crackers was invented by a staunch, stiff-collared Presbyterian minister in Boston named Sylvester Graham (1794-1851)–hence the name of the crackers. He preached against eating white bleached flour and all products containing sugar as being unhealthy for the body, mind, and soul. (Most people now know that’s true–at least concerning the body.) Graham’s beliefs and his crackers started a small temperance movement with his followers who became known as Grahamites.

To make his sugarless crackers, which were more like yeast bread probably sweetened with molasses, Graham created a brown-colored unrefined flour named–you guessed it!–graham flour, made that way by retaining the bran. He believed that all bread should be homemade with graham flour, reminiscent of Mother, home, innocence, and morality. But it was a hard sell: Wealthier citizens could afford the white refined flour and commercially baked goods; dark bread and graham crackers soon became associated with immigrants and ignorance (!). Graham’s ideas that homemade food made with his flour product could be soul-saving were so radical that it caused a riot among Boston bakers. Many used white flour and granulated sugar and weren’t interested in promoting home-baked goods.

In large East-coast cities, Graham took his beliefs a step further. He established boardinghouses for Christians so he could sincerely help keep them pure in all aspects of their lives. They abstained from “wicked” cheerfulness and actions, snacks between meals, tobacco, alcohol, coffee, tea, cider, white flour, and sugar; instead, they followed tenets of simplification, back-to-basics routines, and natural solutions supported by Biblical scripture. This was a very radical regimen for the time. In addition, his Christian Grahamites ate a diet free of milk and meat (which could cause animalistic thoughts) making Graham an early voice for veganism. In fact, in 1850, Graham helped found the American Vegetarian Society. His ideas would later influence a certain Mr. Kellogg and his cereal company.

If you would like a recipe for a more authentic graham “cracker” redolent of Reverend Graham’s, please click HERE. You’ll find that the recipe, from Barbara Bamberger-Scott with homestead.org, is doughier and plumper, not a hard, flat cracker. Bonus! At the same link, you can glimpse an image of the humorless reverend himself.

And check out Moki’s Munchy of the Month in my July 31st newsletter. Coincidentally (wink-wink), it features teddy grahams! You may subscribe to my newsletter HERE.

So, get a clue, Readers. Now that you know graham crackers had once been an ultra-radical health intervention with strong, religious overtones, you might enjoy the modern sugary version even more–or not! Regardless, I for one don’t plan to “go crackers” over it. 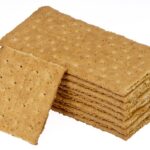 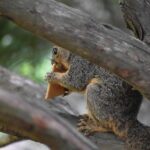 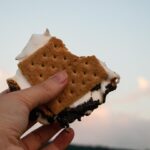 Rev. Graham would NOT approve!