Every morning, I find a lovely surprise in my email inbox. It’s from Word Genius, a company with a mission to teach people a new word daily.

A recent word was flocculate. I had never heard of it. Do you know it?

My first thought was that it had to do with a flock, such as sheep. Turns out I was somewhat correct if we fast-forward through the centuries.

Flocculate is a transitive verb meaning to form or cause to form into small clumps, masses, or tufts.

Flocculate’s etymology, aka, backstory: According to the Merriam-Webster Dictionary, scientists in the late sixteenth century noticed that loose masses separated from a solution or suspension through precipitation often resembled tufts of wool. They began referring to those masses as flocks, from the Latin word floccus, meaning “tufts.” This is not to be confused with the term flock that refers to “a group of animals,” which comes not from Latin but from the Old English word flocc, meaning “crowd” or “band” as in a flock of sheep!

But there’s more: About two centuries later, the Late Latin term flocculus entered the English language and was also used to mean “a small loosely aggregated mass.” By the end of the nineteenth century, a whole word family had been born, including the adjective flocculent, the noun floccule, and finally our verb flocculate!

So, get a clue, Readers. We can describe fur, hair, and wool–and, therefore, certain animals–as flocculated or flocculent since sometimes, that fur, hair, or wool can become woven into a tight mass of corkscrew curls. Which brings me full circle to sheep in a flock with flocculent wool. And pulling a bit more on that woolen thread takes me to my late, great poodle-bichon Jimmy Lambchop with his mass of flocculated curls. Miss you so much, sweet little buddy, and your cute floccules as well. Woof! Baaa! 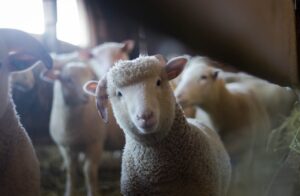 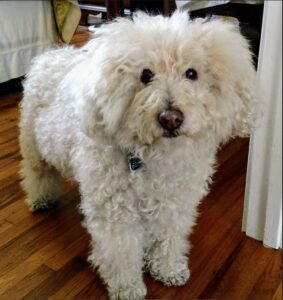