I just wanted to share something fun with you today–one of those happenstances that I couldn’t have foreseen when I set off for the grocery store last Saturday morning.

One of our San Diego stadiums hosted a huge rock/punk/heavy and glam metal music concert on Sunday, August 28th. It featured the quadruple billing of Motley Crue, Def Leppard, Poison, and Joan Jett and the Blackhearts on one of the last stops of their 2022 tour.

Imagine my surprise when a stadium crew showed up at my store to do some grocery shopping for the four groups! The guys stopped in “for a few things” for the bands and after buzzing around with multiple carts, they left hours later with so many boxes that they couldn’t take everything in one trip. The crew planned to come back for Joan Jett’s later.

So, get a clue, Readers. You never know when something newsworthy might happen. Keep your ears and eyes open! 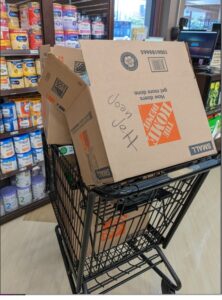 Where Does Your Birthday Rank?
September 8, 2022