Where Does Your Birthday Rank?

Where Does Your Birthday Rank?

I think it’s safe to say that all kids love birthdays. I mean, cake and presents! What’s not to like? My attitude is that birthdays are important because they beat the alternative, so light those candles and enjoy that cake.

Did you know that certain birthdates occur much more frequently than others?

Tomorrow is September 9. It is the #1 most popular birthday in the United States! In fact nine out of the top ten most frequently occurring birthdays are in September. The only one that isn’t is July 7.

You’re probably wondering which day of the year has the least births? It’s December 25, closely followed by January 1. Babies are least likely to be born on holidays, including Halloween and the week of Thanksgiving. And few are born on the 13th of the month! (Superstitions?)

The most common birth month is August; the least common is February.

And which day of the week has the most births? That would be Tuesday!

Want to find out where YOUR BIRTHDAY ranks on the popularity list? Click HERE to find out, or go to zippia.com/advice/most-least-common-birthdays/.

The above birthday information was gathered by researchers from aggregated data of the CDC and Prevention National Center for Health Statistics, and the Social Security Administration on the number of births on each day of the year from 1994-2014.

So, get a clue, readers. No matter how popular your birthday is or isn’t, don’t forget to have a great time and eat cake! Those are requirements on your special day. 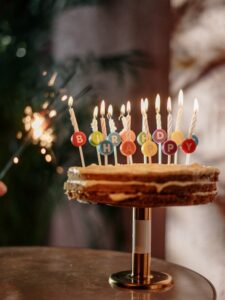