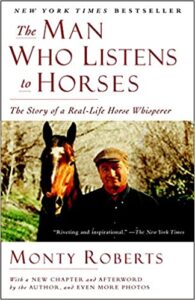 Here is a heartwarming story from the New York Times by Jenny Gross, dated September 12, 2022, that I thought might be as interesting to you as it was to me.

Mr. Monty Roberts, an eighty-seven-year-old legendary horse trainer from California, has special reasons to mourn the passing of Queen Elizabeth II this week.

They shared a three-decades-long friendship.

In April of 1989, Queen Elizabeth invited Mr. Roberts to England’s Windsor Castle to discuss his intriguing method of training horses. There, she witnessed his gentle techniques in which the horse is taught to see the rider as a member of the herd, rather than as a master.

During that visit, Roberts demonstrated his techniques for the queen using twenty-three of the royal family’s horses. That started the long friendship that sometimes meant taking a phone call from the queen in the middle of the night! Thereafter, he visited England six to seven times each year to assist the queen.

Her Majesty encouraged Mr. Roberts to write a book about his method. He did, and The Man Who Listens to Horses became a NYT bestseller!

In 2011, the queen designated Roberts an honorary member of the Royal Victorian Order for his service to the royal family, the queen, and the racing establishment.

From his 100-acre horse ranch in Solvang, California, Roberts reflected this week on how horses brought the queen a sense of calm and escape. While riding horses, she could briefly become a horsewoman instead of a queen.

He will be one of 2,000 friends and dignitaries at her funeral on September 19.

So, get a clue, Readers. Could your passion make a great book that might benefit others? I hope you will be inspired to write as was Mr. Roberts. RIP, Queen Elizabeth.