Hello, All Readers and Fans of my dog Jimmy Lambchop’s blog, which appears in my monthly newsletter.

It is with deep sorrow I report that the love of my life, my poodle-bichon sweetie Jimmy Lambchop, passed away yesterday.

He fought hard but couldn’t overcome complications from his major, emergency surgery that took place on March 10.

I gladly inherited Jimmy from my mom in March of 2016, shortly before her death. Coincidentally, today is the six anniversary of her passing. (When it rains, it pours.)

Mom had Jimmy for three and one-half years before he became my little boy. He had been left on the porch of a doggie daycare center as a puppy, so they named him “Porch” (ugh!). That facility kept him for almost one year before giving him to Second Chance Rescue to offer for adoption. That’s how my mother found him in 2012. She named him Jimmy. I added Lambchop when he started owning me.

His unconditional love, prancing and cute head wags when he wanted a walk, sweet disposition that made everyone near and far fall in love with him, gleefully tossing his toys over his head, eating every meal with gusto, face-lick kisses given generously, and cheerleading my writing from behind me on the bed have forever endeared him to me. My broken heart will wear his paw prints all over it until the end of my life.

Jimmy, my precious one, thanks for being my boy for six years and two days. They were the best years and days of my life. I can only hope they were among the best for you, too. 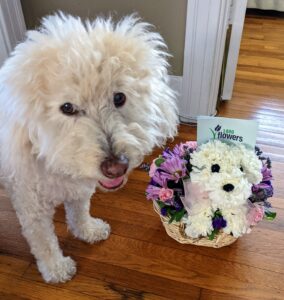 Hello, All Readers and Dog Lovers,

I have my precious dog Jimmy Lambchop home with me now. Lucky us! 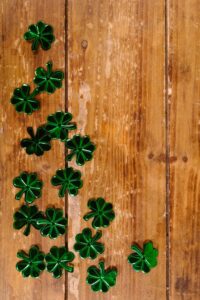 Here he is, comfortably resting in one of his favorite places in the house.

He will probably tell you all about his hospital adventure in his blog that will appear in my newsletter on March 31.

So, get a clue, Readers. How has a pet made you feel lucky? Enjoy them each day. They bring such joy to our lives.

It’s been a long day. I had to rush my precious poodle-bichon, Jimmy Lambchop, to the emergency animal hospital this morning after first taking him to his primary vet.

Jimmy’s in a life-threatening situation with a clogged gallbladder and tumor on his spleen, so out those offending organs must come.

Driving home, knowing that Jimmy was in good hands, I thought about how special our Fur Babies are to us. I am sparing no expense to ensure that my boy has the best medical attention possible.

For some reason, the term “doggerel verse” popped into my head. I know its meaning. The word doggerel is derived from the word dog, as you might guess. But doggerel verse is nonsense, poorly written poetry, or verse that is technically flawed! If you want to read a great example of doggerel verse, check out Scots-Irish poet William McGonagall’s (1825-1902) very flawed poem, “The Tay Bridge Disaster.”

But my point is this: how dare someone centuries ago link the great word DOG with something as odious as DOGGEREL verse. That’s so unfair to dogs!

So, get a clue, Readers and dog lovers. Maybe you could write a great poem about a dog, thereby ensuring it isn’t doggerel! 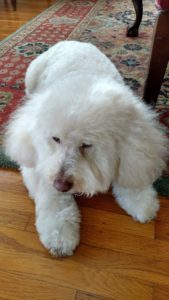 Standing in solidarity with the people of Ukraine, I’d like to introduce–or reintroduce–you to a female Ukrainian poet named Lyuba Yakimchuk.

She was born in 1985 in Pervomaisk, Luhansk, in what was Ukraine’s industrial east. She and her family lost their home and fled as refugees in 2014 when Russian-backed militants occupied her city. Before that invasion, people of her town used to pick the wild apricots from the trees on their country’s border with Russia and give them to conductors to sell on trains that ran between Moscow and Kyiv.

She and her husband are currently living in Kyiv. As of yesterday, they were still there in order “to donate blood for Ukrainian soldiers and to try to be helpful.”

Yakimchuk is a multi award-winning poet, vocalist, and important artistic presence in Ukraine. Kyiv’s New Time magazine listed her among the 100 most influential people in the arts in Ukraine.

In 2021, she published a collection of poems entitled Apricots of Donbas about people surviving war. The first line of her eponymous poem is, “Where no more apricots grow, Russia starts.” The collection has been translated into over twenty languages including English.

Her poetry is described as “playfulness in the face of catastrophe” and evokes Ukraine’s fight for independence and legacy of war. Yakimchuk said, “Language is as beautiful as this world. So, when someone destroys your world, language reflects that.”

So, get a clue, Readers. Perhaps you will feel compelled to investigate this courageous Ukrainian poet’s works. You can find Apricots of Donbas HERE.

A Collection of Yakimchuk’s Poetry

Hello, All Readers and Stargazers,

My then eleven-year-old daughter and I had the honor of attending a three-week science symposium there in the summer of 1992. I was part of the San Diego educators’ team.

One of many highlights of our stay was an audience with the famous astronomer, astrophysicist, author, television personality, and Cornell University professor Carl Sagan (1934-1996). He discussed his latest work in the radio search for extraterrestrial life with the Planetary Society, the importance of science education, and answered our questions, including one from me. But more on that exciting part another day.

All of us were very familiar with this Renaissance man as arguably the world’s leading popularizer of science, mainly from his Emmy and Peabody Award-winning 1980 PBS miniseries Cosmos. It became the most-watched television show in the history of tv with over 500 million viewers in sixty countries. We also knew him for his oft-misquoted phrase, “billions and billions” (of stars). His actual words were, “A galaxy is composed of gas and dust and stars–billions upon billions of stars. . . .”!

My wonderful memory of an afternoon with Carl Sagan made me take notice of a recent Mighty Girl Facebook post. It featured Carl Sagan’s famous quote about the immortality of books and authors. Since I posted about that topic a few weeks ago, I wanted to be sure to include Dr. Sagan’s poetic words on the subject. He spoke them in Cosmos, Part 11, “The Persistence of Memory” (1980). I never tire of his exquisite use of the English language:

“What an astonishing thing a book is. It’s a flat object made from a tree with flexible parts on which are imprinted lots of funny dark squiggles. But one glance at it, and you’re inside the mind of another person, maybe somebody dead for thousands of years. Across the millennia, an author is speaking clearly and silently inside your head, directly to you. Writing is perhaps the greatest of human inventions, binding together people who never knew each other, citizens of distant epochs. Books break the shackles of time. A book is proof that humans are capable of working magic.”

And if you’ve never seen his series, Cosmos, you can find it at your favorite DVD site. If I could add months to the calendar, I’d watch those episodes “billions upon billions” of times! 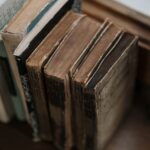 The Magic of Books Across Ages

Recently, I shared to my personal Facebook page a friend’s thought-provoking post. It was from a public group on Facebook called “Compass Group,” which I have joined. It has 219K followers.

In addition to some stunning nature photos from around the world, there was an article about the four types of intelligence quotients. 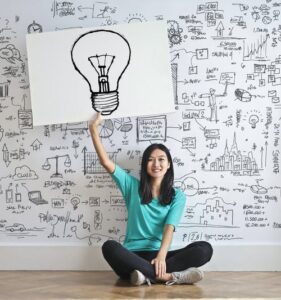 I’m sharing the quotients because I feel they could be very important for educators and parents to recognize and develop in children. Quotient #4 is considered “a new paradigm.”

The article begins, “According to psychologists,” and proceeds to tell of the four types on intelligence:

The article also states, “People that have higher EQ and SQ tend to go further in life than those with a high IQ but low EQ and low SQ. AQ determines who will give up, abandon their family, and consider suicide. Most schools capitalize on improving IQ while EQ and SQ are played down.” 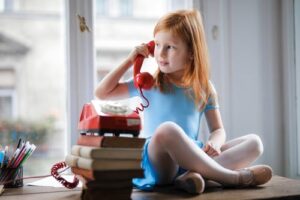 So, get a clue, Readers. The article’s advice is prudent: “Develop children’s IQ as well as their EQ, SQ, and AQ. They should become multifaceted human beings able to do things independently of their parents.” What do you think?